After months of suggesting that mass voting by mail amid the coronavirus pandemic would cause a “rigged election,” U.S. President Donald Trump now appears to be embracing the practice.

With less than three weeks until the presidential U.S. election, the Trump-Pence campaign has rolled out a social media advertising campaign encouraging voters to request their ballots by mail.

One of several advertisements sent to voters on social media urges electors to “vote like President Trump.”

“President Trump mailed in his ballot during the primaries,” the ad reads. “Trump supports safe and secure absentee voting!”

The advertisements refer to the president’s decision to vote by mail during the Republican primary in Florida in 2018.

Another advertisement, which ran between Friday and Saturday, Oct. 15 and 16, told the public “TIME IS RUNNING OUT” and urged them to request their ballots.

The ad amassed more than 1 million impressions, according to Facebook’s Ad Library.

The Ad Library offers a catalogue of paid advertisements, and offers details about their cost and reach. 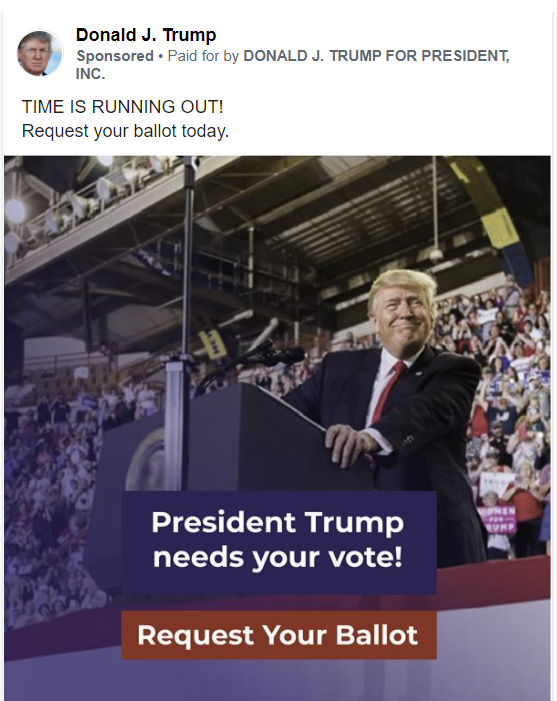 This ad — and several of the others — were shown to voters in key battleground states including Florida, North Carolina, Arizona, Wisconsin, Iowa and Michigan.

The move marks an about-face from the Republican president’s earlier comments on voting by mail.

Trump has spent months repeatedly suggesting mail-in ballots would lead to massive electoral fraud, claiming the practice would result in “cheating” and impact the outcome of the election.

Mail-In Ballots will lead to massive electoral fraud and a rigged 2020 Election. Look at all of the cases and examples that are out there right now, with the Patterson, N.J., being the most recent example. Republicans, in particular, cannot let this happen!

In June, Trump claimed — without providing proof — that “millions of mail-in ballots will be printed by foreign countries, and others.”

“It will be the scandal of our times!” he tweeted.

RIGGED 2020 ELECTION: MILLIONS OF MAIL-IN BALLOTS WILL BE PRINTED BY FOREIGN COUNTRIES, AND OTHERS. IT WILL BE THE SCANDAL OF OUR TIMES!

In the months since the president has doubled and tripled down on these claims.

However, experts disagree, saying voting by mail is a safe practice, and have maintained that fraud related to mail-in ballots is rare.

In a previous interview with Global News, Matthew Lebo, chair of political science at Western University, said mail-in voting does not substantially increase voter fraud, and if it does at all, it would be by a “tiny, tiny amount.”

In fact, a number of states — Colorado, Hawaii, Oregon, Utah and Washington — have been voting by mail for several years.

And, all U.S. states allow at least some portion of its electorate to vote by mail.

But last month, the president suggested the country “get rid of” mass mail-in ballots.

His comments prompted a tweet from the Federal Elections Commissioner Ellen Weintraub, who said in the U.S., they do not get rid of ballots.

3:42
Kayleigh McEnany says ‘there is ample evidence of fraud’ via mail-in voting

“We count them,” she wrote on Twitter. “Counting the ballots — *all* the ballots — is the only way we determine who leads our country after our elections. The only way.”

The president has also attempted to differentiate between mail-in ballots and absentee ballots, saying the latter would be acceptable.

However, experts say they are pretty much the same thing.

….Absentee Ballots are fine because you have to go through a precise process to get your voting privilege. Not so with Mail-Ins. Rigged Election!!! 20% fraudulent ballots?

David Becker, founder of the nonpartisan Center for Election Innovation and Research, told CNN that no-excuse mail-in voting and absentee voting is “essentially the same thing.”

“You request a ballot, you get a ballot, you vote, you send it in, and there are protections in place,” he said. “It doesn’t matter whether you call it mail voting or absentee voting. It’s the same thing.”

Global News reached out to the Trump-Pence campaign to determine what caused the sudden change, but did not hear back by the time of publication.

However, Trump campaign spokesperson Thea McDonald told CBS News, that Trump has “rightly and consistently said that when a voter cannot make it to the polls, they should request an absentee ballot, just as he himself has done.”