As “The Crown” continues to stir up a renewed interest in the British royal family, a recently resurfaced clip of a young Prince William and the late Princess Diana is making the royal rounds.

The behind-the-scenes footage was taken during a family photoshoot with Tim Graham in 1985. It shows the young prince dabbing powder on his mother’s face, as Diana scrunches her face and plays along.

Commenters swooned over the sweet clip:

Additional video footage from the same day shows both William and Prince Harry playing the piano, while Prince Charles tries to get Harry’s attention for the photoshoot.

At one point in the clip, Charles sits Harry on William’s little shoulders, while the elder brother delightfully protests.

Toward the end of the longer footage ― which has been viewed over 2 million times ― one can see the sweet clip of William powdering Diana’s face again:

Below are some of the photos Graham was able to capture during the sitting at Kensington Palace:

The Princess of Wales with her sons, William and Harry, at the piano in Kensington Palace. 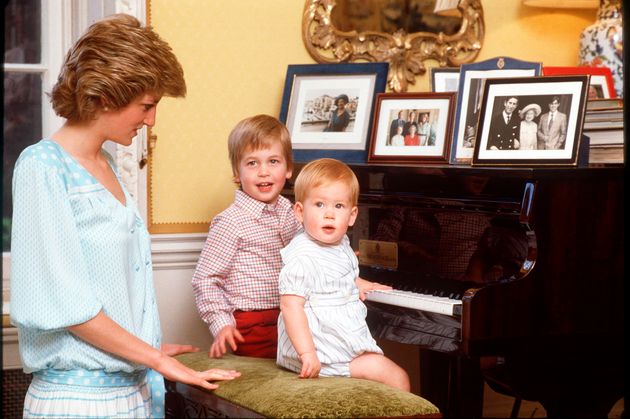 Diana gazes adoringly at her little ones.

While “The Crown” has drummed up even more support for the beloved late princess, some critics are up in arms about the Netflix hit’s label as a drama.

Diana’s brother, Charles Spencer, wants people to remember the series is fictional, and that viewers shouldn’t just accept all that they see as fact.

“The worry for me is that people see a program like that and they forget that it is fiction,” the earl said during an interview last month. “They assume. Especially foreigners – I find Americans tell me they watch ‘The Crown’ as if they’ve taken a history lesson. Well, they haven’t.”

“It is very hard,” he added. “There is a lot of conjecture and a lot of invention, isn’t there? You can hang it on fact, but the bits in between are not fact.”

Subscribe to HuffPost’s Watching the Royals newsletter for all things Windsor (and beyond).