Darlene Yazzie typically hauls water from a windmill 5 miles from her house for her sheep. Officials tell her it’s unsafe for humans but OK for livestock. 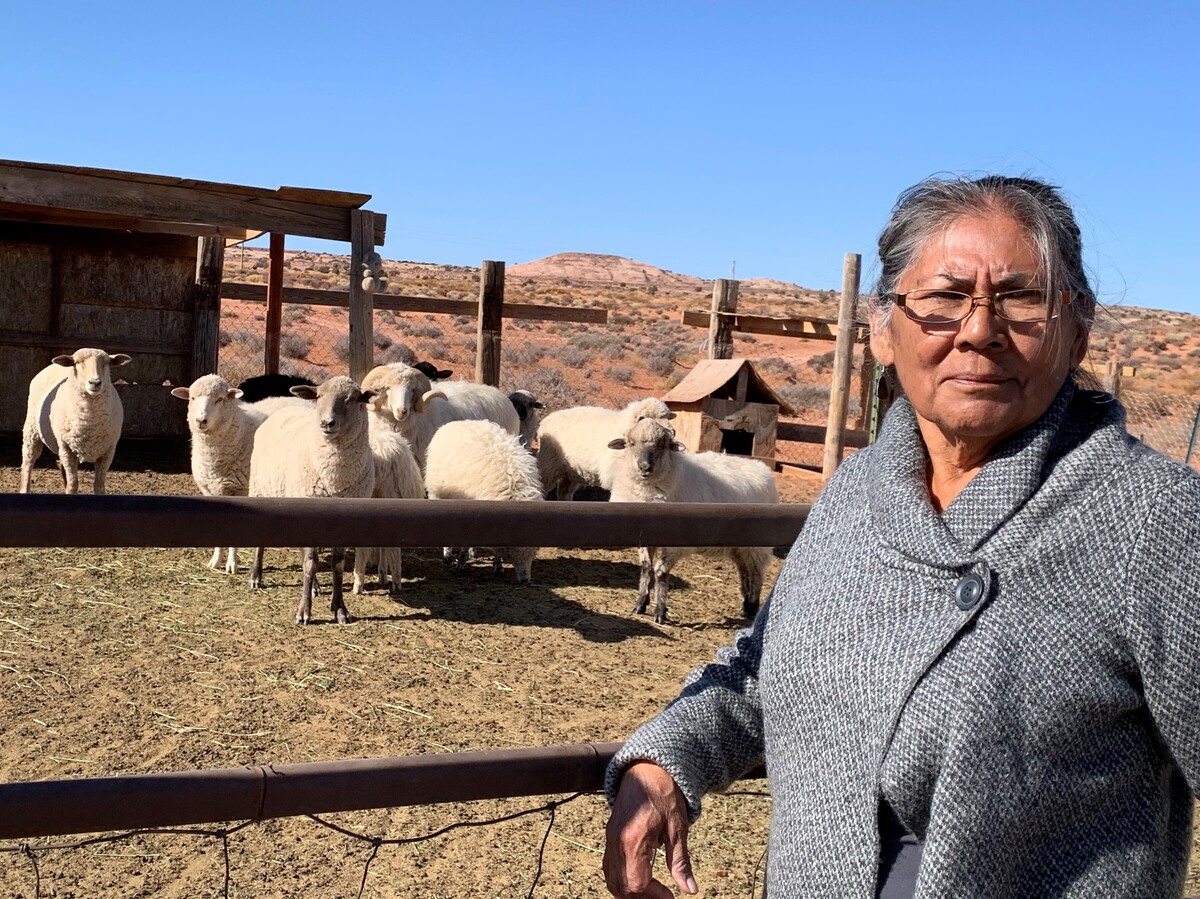 Darlene Yazzie typically hauls water from a windmill 5 miles from her house for her sheep. Officials tell her it’s unsafe for humans but OK for livestock.

For many people, turning on the tap or flushing the toilet is something we take for granted. But a report released Monday, called “Closing the Water Access Gap in the United States,” shows that more than 2 million Americans live without these conveniences and that Native Americans are more likely to have trouble accessing water than any other group.

The nearest water station for Darlene Yazzie is 9 miles away at the Dennehotso Chapter House — a community center — in the Four Corners region of the Navajo Nation. On Tuesday, she counted her dimes and nickels to pay for water. It costs $1.10 plus gas money to fill up two 50-gallon barrels, and she has just been told the price is going up next month.

Yazzie lugged a T-shaped key as tall as her out to the well, where she dropped it down into the hole and turned the crank to open the valve.

Water gushed into the plastic barrel. A cool mist from a leak in the hose rained over her. This is Yazzie’s drinking water. For her animals, she usually drives to a windmill, but on this day it was empty and the sheep were thirsty.

“There’s no water in the windmill,” Yazzie said. “It’s dry because it’s not blowing. The only way they have water is if it’s blowing.”

Yazzie said the windmill water isn’t safe for humans anyway. Officials told her arsenic and uranium levels are too high. Yazzie and many others give the water to their animals, even though they plan to eat them.

“A lot of people died of cancer around here,” Yazzie said. “I noticed that more are being diagnosed. I’m pretty sure it’s because of the environment and the water.”

The groundwater in some areas has been contaminated by the 521 abandoned uranium mines. The new report, by DigDeep and the U.S. Water Alliance, says gastric cancer rates doubled in the 1990s where uranium mining occurred. Unregulated drinking water sources are the greatest public health risk on the Navajo Nation, according to the Environmental Protection Agency. 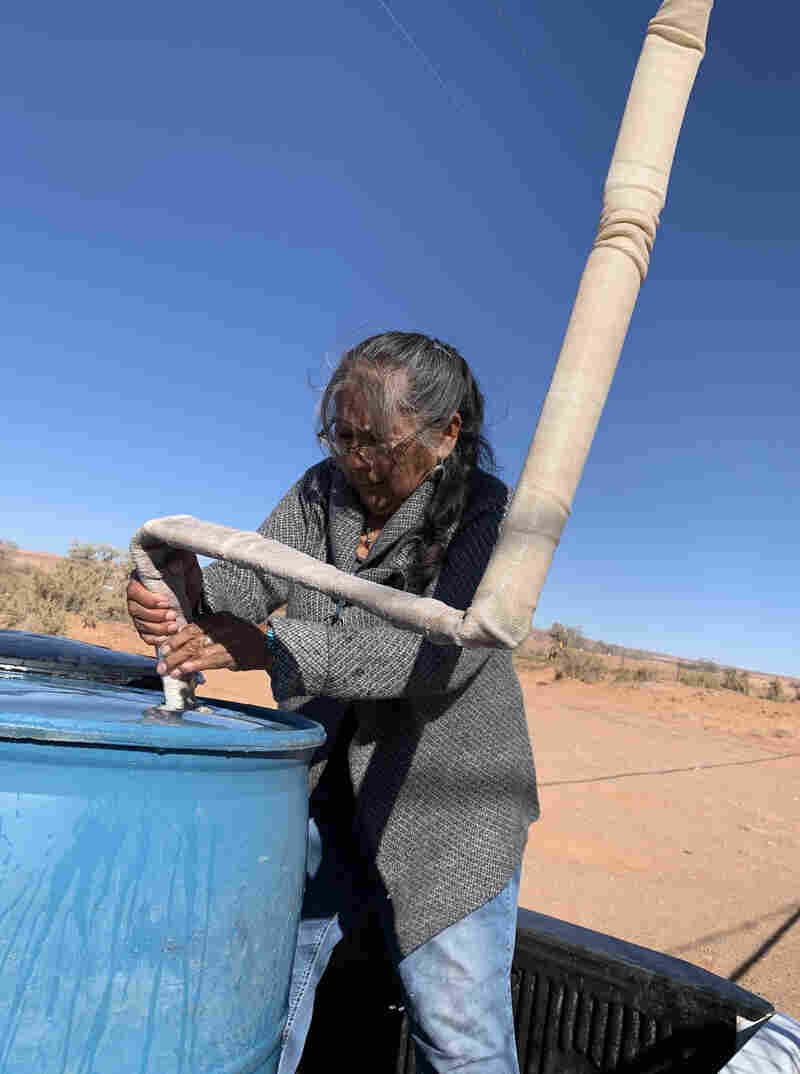 Darlene Yazzie, a retired community health worker, says hauling water, firewood and trash, as well as using an outhouse, are just a few of the things that make life hard on the Navajo Nation. 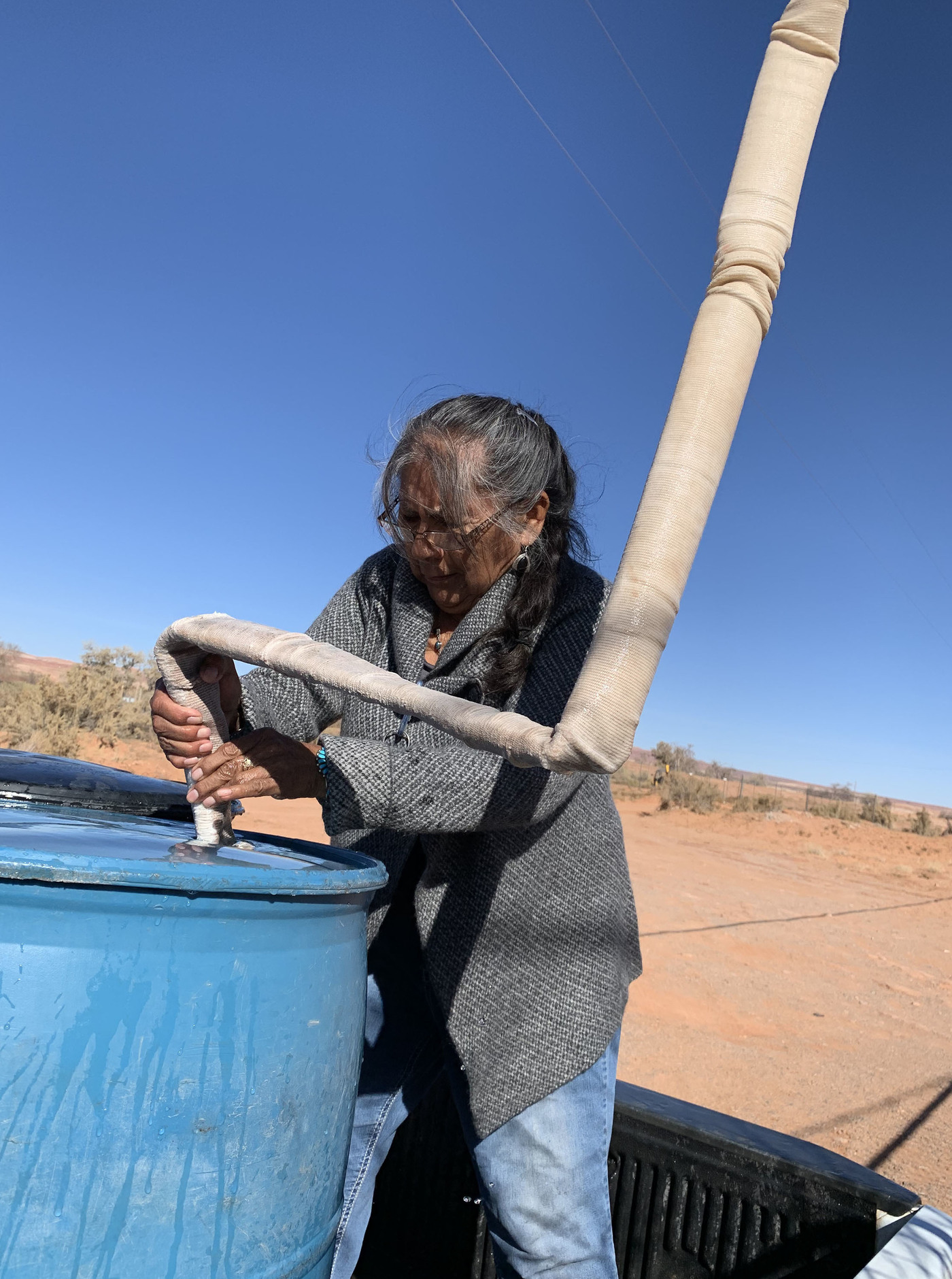 Darlene Yazzie, a retired community health worker, says hauling water, firewood and trash, as well as using an outhouse, are just a few of the things that make life hard on the Navajo Nation.

Fifty-eight out of every 1,000 Native American households lack plumbing, compared with three out of every 1,000 white people, according to the report. This disparity has implications for public health. They experience more deaths, poverty and higher unemployment rates.

“We knew the problem was much bigger, but when we went out to look at the data, it didn’t exist,” said George McGraw, the founder of DigDeep, a nonprofit that has helped build water systems on the Navajo Nation. “No one could tell us, from federal to state agencies to other nonprofits, just how many Americans still don’t have running water or a working toilet where they live.”

So McGraw commissioned experts from around the U.S. to piece together the data they did have and come up with the water gap report. What he found was that race is the strongest predictor of water and sanitation access.

A century ago, water-borne illnesses were a leading cause of death. The U.S. government invested in modern water and sanitation systems and nearly eradicated those diseases. But some communities were passed over.

“Our nations didn’t have access to funding for infrastructure in the same way that it’s federally allocated for cities and states overall,” said Mahrinah von Schlegel, an anthropologist from San Ildefonso Pueblo in New Mexico.

She said that in the Southwest, it’s expensive to build pipelines across such remote sparsely populated tribal nations.

“It’s been a struggle, one, to get the access to that infrastructure capital, and then, two, it’s really expensive to develop some of these remote areas,” von Schlegel said.

In Mexican Water, the next town over from Dennehotso, Richard Nelson helped his elderly mother haul water.

Nelson has been asking community leaders when his mom is going to get clean running water.

Today federal funding for water infrastructure is a small percentage of what it once was. Across the country, 44 million people are served by water systems that recently had Safe Drinking Water Act violations. The Indian Health Service estimated that it would cost $200 million to provide basic water and sanitation access on the Navajo Nation.