John Krasinski once had the creator and writers on “The Office” wigging out over the possibility of him needing to shave his head for a movie role.

But Kim M. Ferry, who served as the hairstylist on the hit show for eight seasons, told Mashable that she and Kraskinski were able to pull off a hair-raising stunt.

Krasinski, who played Jim Halpert in the series, had to cut his hair before the last six episodes of Season 3 in order to star in the film “Leatherheads.”Greg Daniels, the creator and showrunner of the U.S. version of “The Office,” didn’t want Krasinski shaving his head and told him to turn down the role.

Instead, the actor devised a plan to have Kerry outfit him with a wig, unbeknownst to the cast and crew.

“He paid for the wig — a human hair wig made by a friend of mine, Natascha Ladek, who’s the best wig maker in town,” Ferry told Mashable.

“[Krasinski] came in a little later that day, and I had the wig hidden in a little secret spot ready for him. When it was just him and I, I put it on him, and then he went out and filmed,” Kerry said, adding that she felt like her helping was putting her job at risk.

John Krasinski as Jim Halpert (pre-wig) during the Season 3 episode of “The Office” called “Initiation.”

After filming, Krasinski headed over to Daniels’ office to show him the wig. Ferry drove over as well and ran into “Office” actor and writer B.J. Novak, who told her he thought people would be able to tell if Big Tuna was wearing a wig.

When Ferry was called into Daniels’ office, Krasinski’s wig was on the desk. It seemed the boss had been convinced.

“Greg kept saying, ‘No! I would know if you’re wearing a wig,’” Ferry said, relaying what apparently had happened during Daniels’ the conversation with Krasinski. “So John leaned over the desk and said, ‘No, I don’t think you would.’ That’s when he ripped it off and shut it down, and we got to do the wig.”

Below is a shot of Krasinski in the wig: 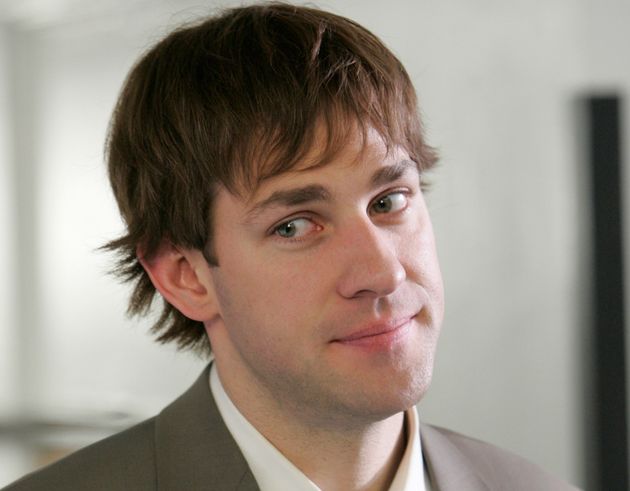 Krasinski wearing a wig in the 2007 episode “Product Recall.”

Although the wig was a bit of a change for Krasinski, his best known transformation occurred when he dropped down to 5% body fat for his role in the Michael Bay movie “13 Hours.”

“Getting stronger every day is thrilling,” the actor said the time, for a Men’s Health magazine cover story in 2015. “I gotta be honest: It was brutal at times. We did tons of metabolic work, dragging sleds and all this stuff I’ve seen NFL players do.”