The Monastery of Our Lady of Mt. Carmel in Washington, D.C. is the new host of a 151 kW community solar garden. The panels will provide roughly 50 nearby households with green energy. 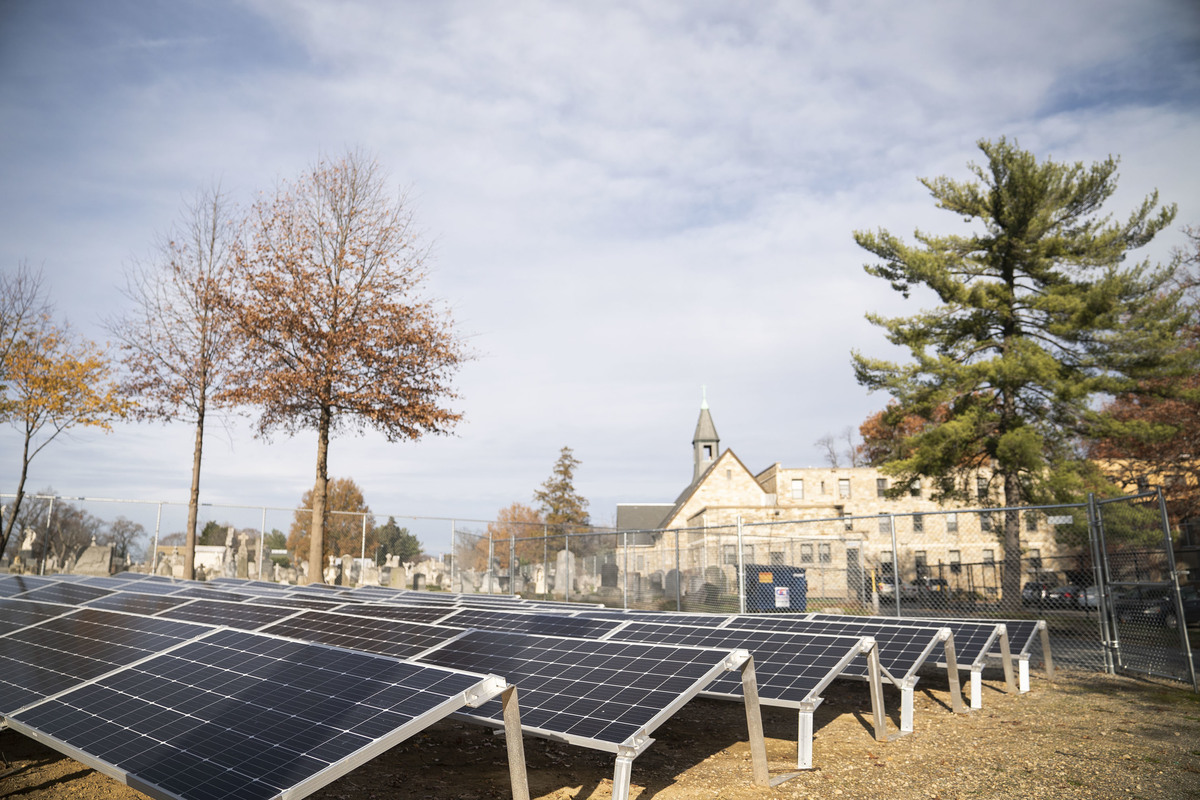 The Monastery of Our Lady of Mt. Carmel in Washington, D.C. is the new host of a 151 kW community solar garden. The panels will provide roughly 50 nearby households with green energy.

Minnesota winters are long, brutal and gray. Minneapolis resident Keith Dent has endured 38 of them. But over the last several years, he’s experienced what he calls a “reintroduction to the sun.”

In 2017, Dent helped install, and later subscribed to a massive community solar garden mounted atop Shiloh Temple — a majority black church in north Minneapolis. Today, the 630-panel array provides Shiloh itself, the nearby Masjid An-Nur Mosque and 29 local households with green energy. 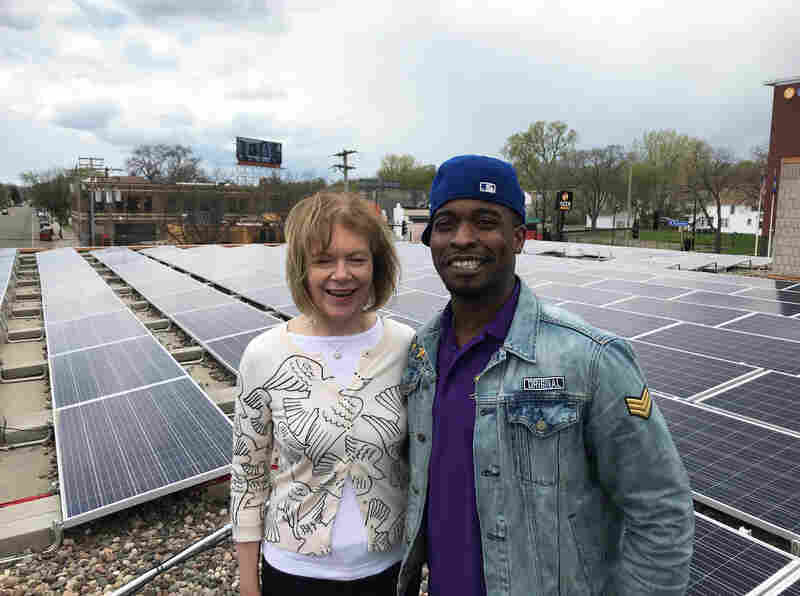 Sen. Tina Smith, D-Minn., and Keith Dent stand in front of the community solar garden on the roof of Shiloh Temple in Minneapolis. Dent helped install the array. 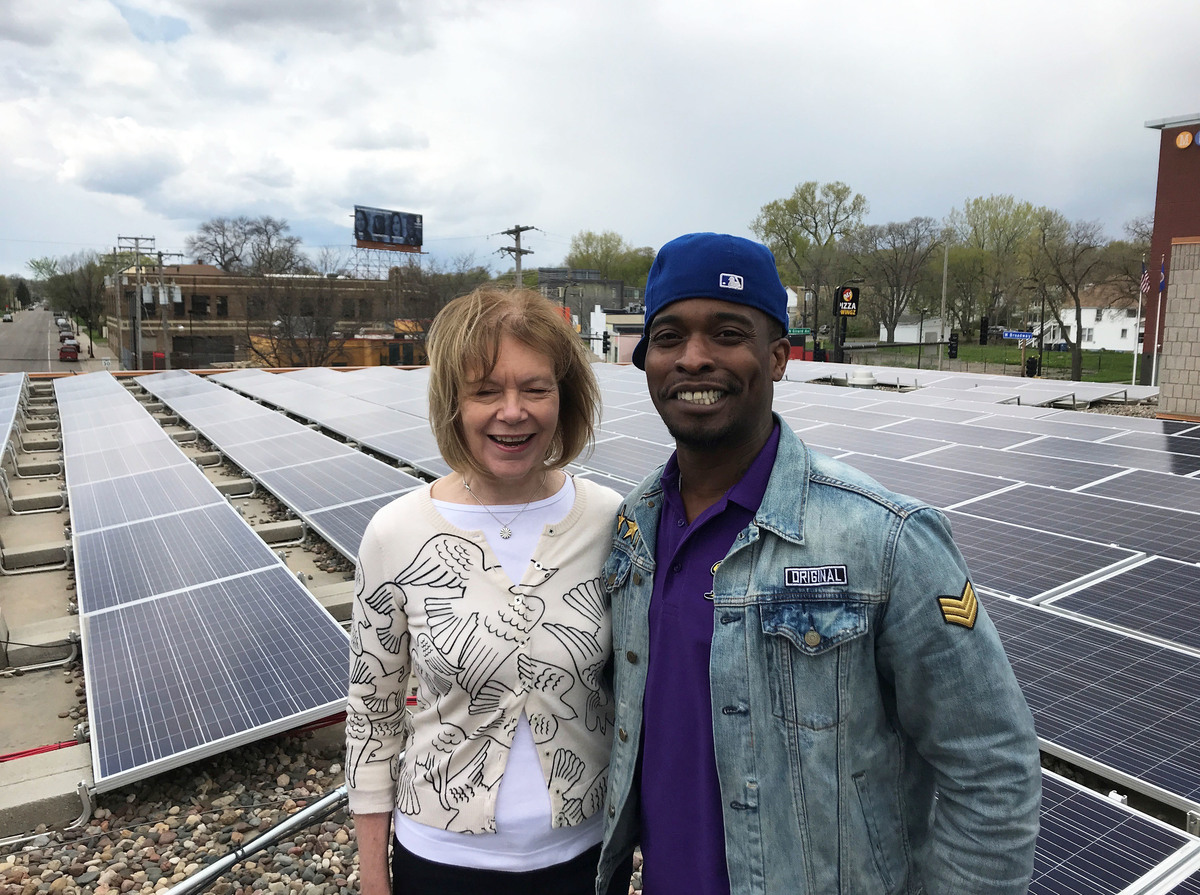 Sen. Tina Smith, D-Minn., and Keith Dent stand in front of the community solar garden on the roof of Shiloh Temple in Minneapolis. Dent helped install the array.

The Shiloh project is among hundreds of community solar gardens cropping up nationwide working to solve an obstacle many face when trying to go green: the cost of installing rooftop panels, which for a typical household, runs north of $10,000. The project is also among a growing cluster of initiatives affiliated with faith-based institutions seeking to advance their missions of justice by bringing renewable energy to low income communities.

Dent says his utility bills have dropped noticeably since he first subscribed; “That extra $30 or $40 a month? That’s groceries, that’s gas, that’s ballet shoes,” he says.

But the financial impact extends beyond his own budget — it has also provided the community with first-hand exposure to clean energy.

“It’s a wonderful thing to not have to feel like you have to be of [a certain] status or class to be able to go green, or be conscious about the environment,” Dent says.

Nearly one third of U.S. households struggle to pay their utility bills, according to a 2018 U.S. Energy Information Administration report. To make up for electricity’s weighty cost, the agency says, roughly 20% of households forgo necessities like food and medicine, while 11% keep their thermostats at unsafe temperatures. Low income communities of color are hit the hardest — spending a larger share of their income to power homes that are often older and poorly insulated.

According to Gabriel Chan, a solar researcher and assistant professor at the University of Minnesota, solar gardens aim to address these “energy burdens.”

They do so by connecting key players who make it possible for neighbors to share solar power: a developer to organize and install the project, a public or private financier to pay for it and a host organization with an empty roof or slab of land.

Then, nearby residents subscribe to the array. Depending on the project, subscribers either pay the solar developer once, up-front, or each month, according to a pay-as-you-go plan. Once the panels go online, the energy they generate is redirected to the electrical grid, and credited to subscribers’ utility bills. Under many models, those credits are worth more than the subscription payments, slashing overall costs.

That system is made possible by policies passed in at least 19 states and the District of Columbia that require utility companies to pay solar providers for the power they generate.

These policies have helped spark a boom in shared solar, and according to the Solar Energy Industries Association, that growth won’t slow down any time soon. The group predicts that between 2018 and 2024, the shared solar market will grow by 3.5 gigawatts — enough energy to serve an additional 700,000 homes. According to Chan, community solar comprised roughly 5% of total solar development in 2018.

Still, experts say high-need households continue to face myriad obstacles to benefiting from the cost-cutting programs. Many community solar projects require subscribers to have high credit scores, and they can also entail impossibly complex payment plans. That’s in addittion to language barriers, cultural differences and the reality that many households are simply unaware that green energy is an option at all. 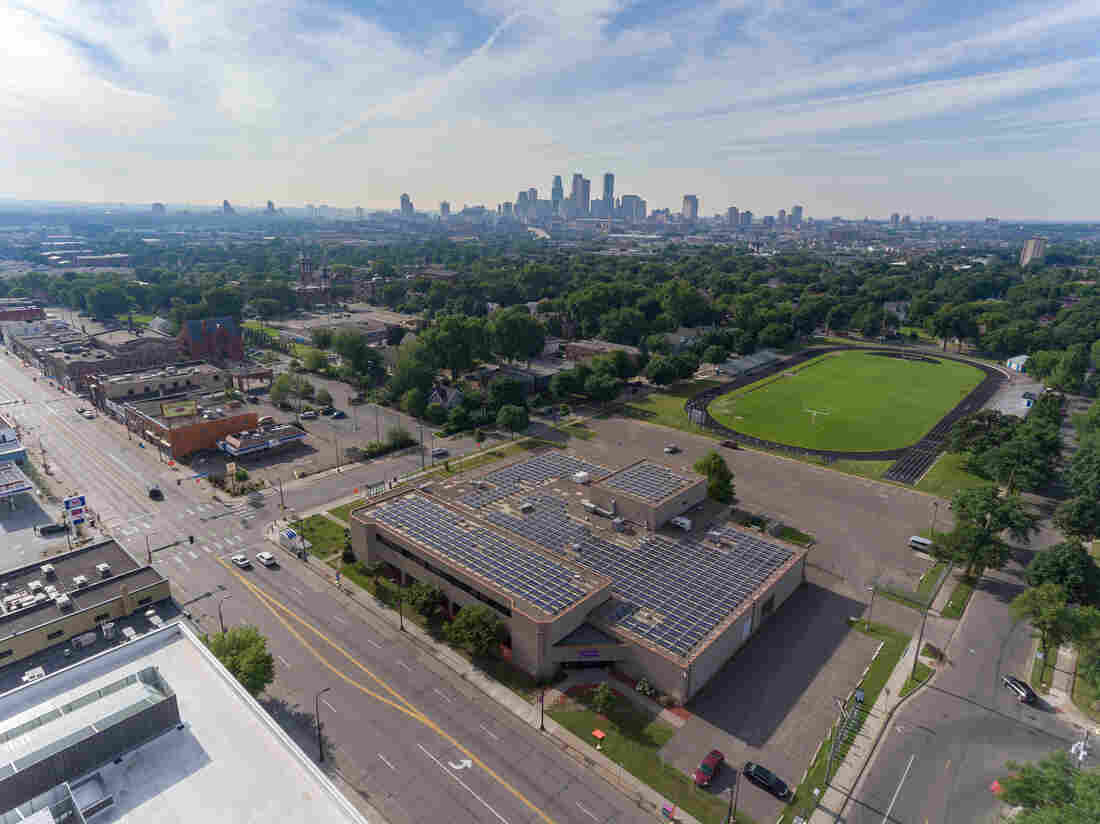 In 2017, Innovative Power Systems installed a 204 kW community solar garden on top of Shiloh Temple, a majority African American church in North Minneapolis. The array provides affordable, green energy to the church, a mosque and 29 households. 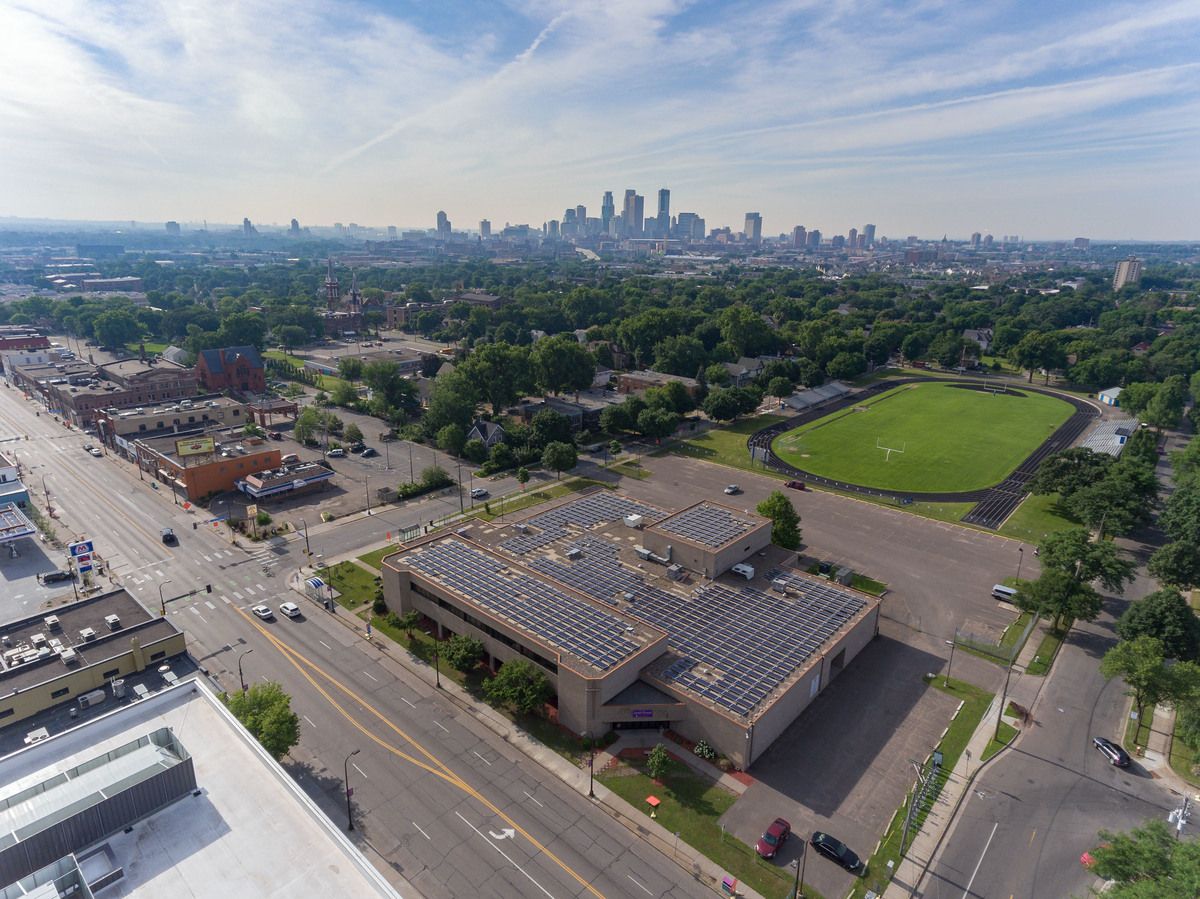 In 2017, Innovative Power Systems installed a 204 kW community solar garden on top of Shiloh Temple, a majority African American church in North Minneapolis. The array provides affordable, green energy to the church, a mosque and 29 households.

Religious institutions are long-standing community anchors, he says, which makes them ideal partners for developers struggling to connect low income households with clean energy. In turn, they’re being used as launching pads for some of the most “innovative models” on the community solar market, Chan adds.

According to Donnel Baird, the CEO of BlocPower, a Brooklyn based green-technology startup, a key way to expand clean energy is by exposing more — and more diverse — communities to solar.

“The only way to do that is through institutions they trust,” Baird says. “At the top of the list for that are institutions of faith, which are located [in] and serve low income communities.”

Faith groups have long espoused justice-driven values and mandates. But in step with rising concern over climate change, increasingly, religious missions not only entail addressing social and economic inequality, but also environmental injustice.

Interfaith Power & Light, a national coalition that fuses faith with environmental advocacy, puts its succinctly: “The very existence of life – life that religious people are called to protect – is jeopardized by our continued dependency on fossil fuels for energy. Every major religion has a mandate to care for Creation.”

Pope Francis doubled down on the idea in 2015, when he wrote a landmark, 184-page letter calling for an “ecological conversion.” He implored people of faith to hear “both the cry of the earth and the cry of the poor.”

In many cases, churches, temples and mosques are taking an obvious first step: addressing their own emissions by subscribing to a nearby solar garden, or installing panels on their own roofs.

Nationwide, at least 770 houses of worship have installed solar panels to power their own buildings, according to Interfaith Power & Light.

In other cases, like at Shiloh, religious institutions are participating in projects that spread clean energy beyond their own grounds.

Bishop Richard Howell Jr., the head pastor of Shiloh, said the church has long been a hub of north Minneapolis, providing residents with support and resources during times of need.

“We’re in a community where unemployment is very high, and there’s a lot of health and educational disparities,” Howell says.

“When we heard that we were going to provide electricity for households on the north side of Minneapolis — which would also mean utility bills would be reduced because of that — who were we but to accept the fact that this was a great opportunity.”

Cooperative Energy Futures, the Minneapolis-based nonprofit that spearheaded the project, eliminated credit score requirements to ensure the garden was accessible to the immediate community. It also required the installation company, Innovative Power Systems, to hire a team that was at least 50% people of color.

To Dent, what distinguishes the Shiloh project is the solar garden’s “cooperative approach.” Under the model, subscribers aren’t simply customers of the array — they’re part-owners.

In turn, Dent says, “No matter what changes around you, you still own this — and no one can take that from you.”

Groundswell, a D.C.-based nonprofit, in partnership with local faith groups, built four solar gardens that will provide more than 100 income-qualified households with assistance designed to slash their electricity bills in half.

Michelle Moore, the CEO of Groundswell, says those savings are made possible by creative financing strategies that cover the subscription fees customers pay under traditional community solar models. Michelle Moore, CEO of Groundswell and Father Salvatore Sciurba at the Monastery of Our Lady of Mt. Carmel in Washington, D.C. Michelle Moore, CEO of Groundswell and Father Salvatore Sciurba at the Monastery of Our Lady of Mt. Carmel in Washington, D.C.

Three of the gardens — one hosted by St. Luke Baptist Church and two sponsored by Dupont Park Seventh Day Adventist Church — are funded by the D.C. Department of Energy and Environment, which provides free solar to residents whose income sits at 85% or less of the local median income.

Moore says the idea behind the model is to “share power” among neighbors — some of whom can afford to pay a higher price for energy than others. But she also acknowledges that not all cities and states have equity-focused programs like D.C.

“It’s wonderful, and very abundant for the district, but it’s unusual,” she says.

The fourth Groundswell project, located on the grounds of a D.C. monastery, will provide free subscriptions to a set number of households based on income; the rest will pay full price. It’s a model that could be adopted elsewhere, Moore says, one that shows it’s possible to “share savings with people who need savings the most.”

She says religious institutions make for strong partners in this effort because unlike many business and homeowners, “they’re in it for the long haul.”

But more fundamentally, she adds, “people go to churches when they need help.”

And just as families flock to places of worship when they don’t have coats in the wintertime, or when they can’t afford to feed their kids, now, “you go to church when you can’t pay your energy bill.”