We’re at the time of year when pumpkins seem to be everywhere ― on doorsteps, restaurant menus, store displays, arts and crafts tables and more. But the types of pumpkins best used in some contexts are not ideal for others.

After carving jack-o’-lanterns for Halloween, you may want to use the pumpkin guts you removed to make a delicious fall meal. But is this a good idea? We did some research and asked an expert to break it down.

While the pumpkins best suited for carving are technically edible, they’re not the tastiest options for cooking.

Which Pumpkins Are Best For Carving?

“There are several varieties of traditional jack-o’-lantern pumpkins that are best suited for carving ― Racer, Magic Wand and Zeus, to name a few,” Travis Nordgren, a principal produce buyer for Whole Foods Market, told HuffPost. “These varieties are usually a very deep orange in color, symmetrical in shape and hold up well when carved.”

Nordgren noted that such pumpkins are typically not called out by variety in stores but rather referred to as large, medium or small carving pumpkins ― so if they’re labeled by size, that’s a cue not to eat them. When choosing a carving pumpkin, it’s best to pick one with a sturdy stem so that you can keep the lid intact and help illuminate your jack-o’-lantern.

But can you cook and eat the flesh of these carving pumpkins? Technically yes, but you may not want to.

“Carving pumpkins tend to have thinner walls that are more stringy, grainy and woody in texture ― which unfortunately doesn’t taste very good,” said Nordgren. “They are edible, but they would need a lot of help from other ingredients because of the texture, so proceed with lowered expectations if using for dishes.”

He recommends always saving the seeds, however. You can toss them in olive oil with a seasoning like garlic salt or cumin and roast them in the oven for an easy seasonal snack.

Which Pumpkins Are Best For Cooking?

When it comes to cooking pumpkin dishes, canned pumpkin is a delicious option, but if you want to start from scratch, there are options at the grocery store and farmers market.

“The smaller ‘sugar pie’ pumpkins are most commonly used for cooking and eating. This variety has a thicker, more dense flesh than carving pumpkins as well as better texture and sugar content, providing a much better eating experience,” Nordgren noted. These kinds of gourds are sometimes called sugar pumpkins, pie pumpkins or sweet pumpkins. 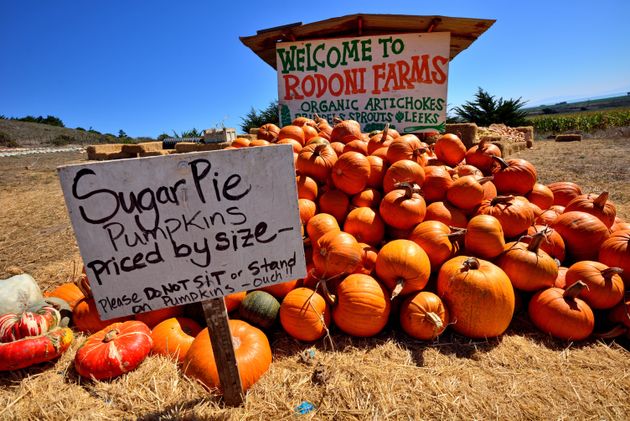 Sugar pie pumpkins for sale at a farm sale in a field in California.

“In addition to the smaller pie pumpkins, the Long Island Cheese Pumpkin is known as one of the better-tasting varieties and is a great option for stuffing and roasting,” he added.

Other popular types of pumpkins for cooking include Baby Bear, Cinderella, Fairy Tale, Jarrahdale, Jack Be Little, Ghost Rider and Baby Pam. Some have noted that Autumn Gold pumpkins are good for cooking and carving. And, of course, many of these optimal ingredient pumpkins make great decorations as well.

If you don’t know the name of the pumpkin variety you’re buying, there are ways to determine if it would be better for cooking and eating rather than carving.

“Size is always a good rule of thumb. Smaller sugar pie pumpkins are much better for cooking and eating, while the larger varieties are best suited for carving,” Nordgren said. Carving pumpkins also tend to have more shallow ribs throughout, which make them easier to cut into.

It’s also useful to note that carving pumpkins are often displayed outside in front of grocery stores, while pie pumpkins may be located in the produce section with other common winter squash varieties like butternut and spaghetti.

The fact that carving pumpkins don’t make the best ingredients may seem like a big problem from a waste perspective, but the good news is they’re compostable and make good livestock feed.

0 0 0 0
Previous : The Sun Looks Ready For Halloween In Eerie ‘Jack-O’-Lantern’ NASA Image
Next : Don’t Sleep on Tunis, a City That’s More Awake Than Ever Before