How Absentee Landlords Keep Farmers From Protecting Water And Soil

Prairie strips in fields of corn or soybeans can protect the soil and allow wildlife to flourish. This strip was established in a field near Traer, Iowa, in 2015. 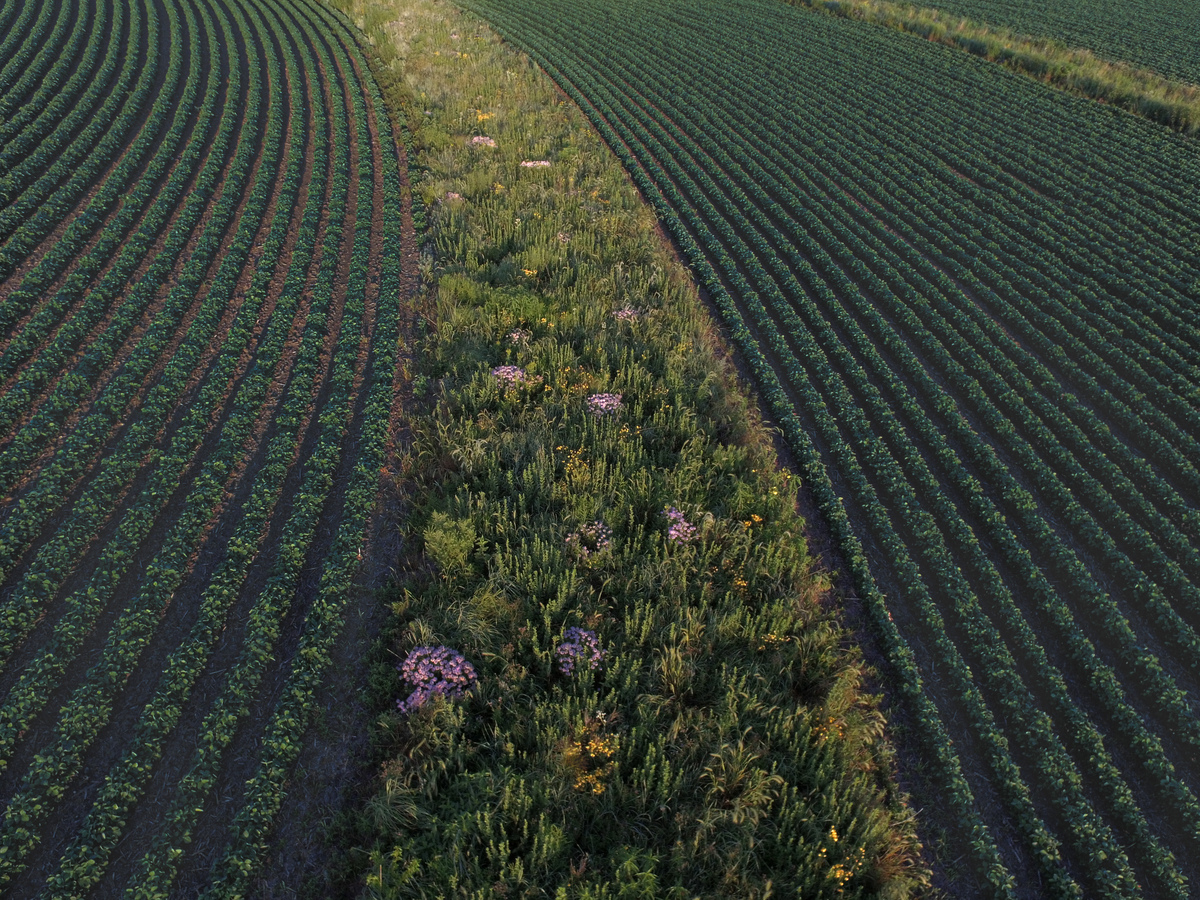 Prairie strips in fields of corn or soybeans can protect the soil and allow wildlife to flourish. This strip was established in a field near Traer, Iowa, in 2015.

Lisa Schulte Moore loves nature. To stand in an old-growth forest, she says, “I can only describe it as healing.”

When she moved to Iowa to teach ecology at Iowa State University, she didn’t get that same feeling when she found herself in amid acres of corn. She wasn’t hearing birds or seeing many bugs. “All I can hear are the leaves of the rustling corn,” she says. “Not one biological noise. You know, they call it the green desert.”

This is, in fact, the central environmental problem with agriculture. This year, corn and soybeans cover an area of the United States equal in size to all the east coast states from New York to Georgia. It has displaced wildlife and left the soil more vulnerable to water and wind erosion.

But Schulte Moore says that it doesn’t have to be a green desert. She’s been studying a farming practice called “prairie strips” – stretches of land within fields of corn or soybeans, accounting for perhaps ten percent of the total area, which farmers have set aside for a mixture of tall-stemmed grasses and wildflowers.

When she’s stepped out of the corn, into one of these bits of prairie, it’s a different world, she says, with “birds singing … bees buzzing, crickets chirping, there was stuff hopping around.” These strips of prairie also protect soil and water, and capture carbon dioxide from the air.

For this to happen, though, farmers have to be willing to give that land back to nature. And many experts on farm land say that it can make economic sense.

One of them is Steve Bruere, president of Peoples Company, in Des Moines, Iowa. He buys, sells, and manages farmland across the country.

“One of the first things we do, and we do this on every farm that we manage,” he says, “we run these profitability maps.”

His company creates a detailed map of the farm, sometimes using public databases, in other cases data collected by GPS-equipped machinery that farmers use to fertilize and harvest their crops. The maps show what farmers spend and what they earn on every acre. Bruere’s company consistently finds that some of the land loses money.

“It’s amazing,” Bruere says. “About ten to fifteen percent of all the acres in Iowa aren’t profitable.” These can be hillsides with eroded soil, or parts of a field where water sits in a big puddle after every rain. That’s where Bruere’s company advises farmers to cut their losses and maybe bring back some prairie instead.

Some Midwestern farmers are doing this kind of thing. Many are not. And one reason, the farm experts say, is an underappreciated fact about America’s farmland: Farmers in the Midwest, on average, only own about half of the land that they use. The rest of it, they rent, year by year, from a collection of landlords.

Linda Prokopy, at Purdue University, has studied these landowners. “They’re a very diverse group of people, much more diverse than farmers,” she says.

Many are retired farmers, now renting the land to the next generation. Some inherited it from grandparents. “You have younger urban people who co-own a piece of land with many cousins, and don’t know anything about farming,” Prokopy says.

That means when it comes to managing that land, Steve Bruere, from Peoples Company, says, it often plays out like this: say that someone owns 160 acres, of which 30 acres are ill-suited for growing crops. The landlord still will rent out the whole parcel.

“As a landowner, you want those 30 acres farmed, because you’re trying to get rental revenue on every acre that you can,” he says. The tenant farmer, meanwhile, goes along with it, because he or she really wants the 130 good acres.

Sarah Carlson, a long-time environmental advocate with the group Practical Farmers of Iowa, gets annoyed by land owners who seem only to want their rent check. “We need to start calling landlords ‘slum lords’ in a lot of cases,” she says.

Take another missed environmental opportunity, she says: cover crops. This vegetation that farmers can plant in the off-season to protect and enrich the soil. It’s great for the environment — and in the long run, for crops, too — but it costs money upfront. Farmers who rent land, and who may not have access to that land in the long run, are reluctant to spend that money.

Carlson says that some landlords do care enough that they’ll spend money to protect the environment, building prairie strips, or paying for cover crops.
But they’re the exceptions.

“Even my Mom’s not that kind of landlord, and I’m her daughter!” she says. “I’m like, ‘What do you mean, we’re not going to do cover crops? What is wrong with you!’ “

Steve Bruere, the land broker, says he does see signs that things are changing. A new kind of landowner is showing up, who didn’t end up with land by accident, but decided to buy it. Some of them did so because they care about how food is produced and about the environment. Others are purely investors. For them, the land is a financial asset. And they understand that this asset can increase in value if they spend the money required to protect it.